Broctor Death is a playable character from the run 'n gun game The Expendabros.

He is a parody of Doctor Death portrayed by Wesley Snipes from The Expendables 3. 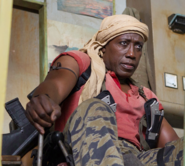 From "The Expendables 3"
Add a photo to this gallery
Retrieved from "https://broforce.fandom.com/wiki/Broctor_Death?oldid=12430"
Community content is available under CC-BY-SA unless otherwise noted.