Brobocop is a playable character in the run and gun platform game Broforce,  He was added to the game with an update of the Broforce Brototype.

Brobocop is a parody of the fictional character RoboCop portrayed by Peter Weller in the Robocop film series. RoboCop is a cyborg built by the sinister corporation Omni Consumer Products from the corpse of Detroit Police Department officer Alex J. Murphy.

A display of his amazing firepower 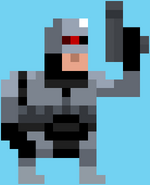 Another display of his firepower
Add a photo to this gallery

Retrieved from "https://broforce.fandom.com/wiki/Brobocop?oldid=12837"
Community content is available under CC-BY-SA unless otherwise noted.